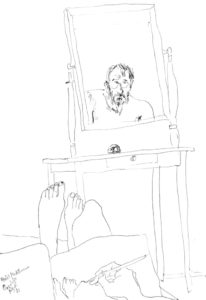 Desplans, in collaboration with LA GALERIE d’architecture, is glad to release an exceptional collection of drawings by one of the leading figures of contemporary architecture and 1992 Pritzker Prize winner Álvaro Siza.

His formation in architecture at the School of Fine Arts of the University of Porto, together with his foundness for sculpture, gave to his works a style described as poetic modernism or critical regionalism without really capturing its true identity. If to be categorized, Eduardo Souto de Moura maybe best described his work: “Siza’s houses are just like cats sleeping in the sun.”

All along his carrer he provided sensitivity and attention to the environmental integration of his projects. Some of his notorious works are Leça de Palmeira Swimming Pools, Boa Nova Tea House but he was also very committed to the social scope of the project. One of the social housing projects he designed is Quinta de Malagueira complex in the city of Evora, Portugal.

He has conceived and has collaborated to numerous international projects and in 1992 he was awarded the Pritzker Prize for the renovation project in the Chiado Area of Lisbon, an old district that was destroyed by fire in August 1988.

He transports us into his sensitive universe through ten drawings that explore the theme of anchoring, or the way in which the architect reacts to a territory. The lines are sure, the composition is harmonious, the idea is clear. An architectural style is born, anchored to the land, dialoguing with the horizon, responding to the sky. Each drawing represents an emblematic project conceived by Álvaro Siza: the sublime, ocean-side swimming pool at Leça da Palmeira and the School of Architecture at Porto are two examples.

Discover more about his work HERE.