OMMX was invited to produce a proposal to extend the Begijnhof in Bruges, a UNESCO world heritage site, for a special anniversary edition of Forum.
Accepting the buildings’ future to be one of continual restoration and conservation, the extension exploits the language of temporary works, as a prosaic, uncontentious and sole means to extend such a building. The courtyard is inscribed with a white oval veil and timber structure that simultaneously recalls the Beguines, provides access for remedial works, and defines a cloister of varying depth to house new and displaced activity from within the Begijnhof and city beyond. The new sequence of interstitial rooms also provides added capacity to accommodate an increased population of tourists, a by-product of the site’s UNESCO listing. In so doing, the extension consciously plays with and subverts accepted norms of how to treat historic buildings and the hidden potential therein. 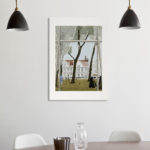