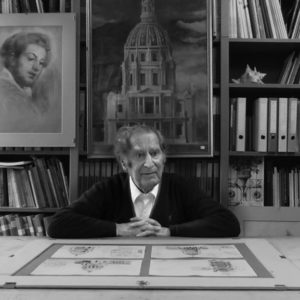 Passionate about history and drawing during his studies, Jean-Claude Rochette turned after obtaining his degree in architecture in 1955 towards a specialization in heritage. After collaborating with Robert Camelot ACMH and developing a liberal activity, JeanClaude Rochette was awarded major in the competition for Chief Architect of Historic Monuments in 1964. During his professional practice he was responsible for working on monuments prestigious historic sites such as the Château de Vaux-le-Vicomte, the Hôtel des Invalides in Paris, the châteaux of Ecouen and Maisons-Laffitte and the Montensier theater in Versailles. Alongside its activity in France, the State entrusts it with operations on French buildings in Europe. Expert missions are also assigned to it within the framework of UNESCO. In 1982 he was appointed Inspector General of Historic Monuments. Driven by a desire to pass on his knowledge, he was for many years president of the Académie Anquetin and professor at the Ecole de Chaillot.