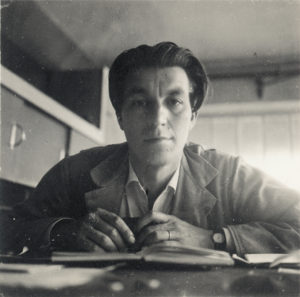 The limited oeuvre of the Belgian architect Gaston Eysselinck (1907 – 1953) provides some of the most compelling evidence of innovation in Belgium architecture. He took part in the CIAM congress of 1930 and appeared in the legendary group photo along with Mies van der Rohe and Le Corbusier. His architecture, homes and buildings, can be considered as ‘Neues Bauenʼ (New Building) and his furniture was strong in functionality and composition. He received the Van de Van Prize in 1937, the most influential architectural prize in Belgium at the time. Eysselinck believed in the feasibility of ” better future “. The control of chaos by the choice of rational order was one of the greatest aims he pursued.