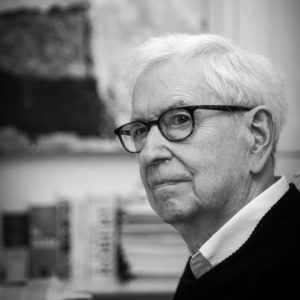 The architect Charles Vandenhove (1927-2019) was one of the greatest Belgian architects of the second half of the 20th century. Trained as a modernist architect, he was passioned in classical architecture. He is the author of the Center Hospitalier Universitaire de Liège and worked with artists at La Monnaie in Brussels.

But he also designed the Théâtre des Abbesses in Paris, a courthouse, a town hall and many housing estates in the Netherlands. He knew how to hare his know-how with the best construction craftsmen and often collaborated with visual artists such as Sol LeWitt, Daniel Buren, Anne and Patrick Poirier and many others. His highly dense architecture reveals a passion that he wanted to share with the greater number.

The Jeanne and Charles Vandenhove Foundation is housed at the Hotel Torrentius, a historical monument in Liège from the 14th century, renovated by the architect and which now houses all of his archives. It works closely with schools of architecture and is linked to the University of Ghent, which houses the architect’s collection of works of art in a contemporary pavilion, the ultimate work of Charles Vandenhove.