L’Architecture d’Aujourd’hui is the reference architecture review created in 1930 by André Bloc together with Le Corbusier. Re-launched in 2009 by the publishing house Archipress & Associates, the magazine is published six times a year and distributed worldwide. A prestigious committee supports the magazine, including Shigeru Ban, Patrick Bouchain, Frank Gehry, Renzo Piano, and many others. Faithful to the spirit of André Bloc, L’Architecture d’Aujourd’hui gives a critical look at the contemporary debates on the 21st century architecture.

In December 1972, AA dedicated his number 165 to the “Work Environment” with a black and white photograph of the Italian photojournalist Gianni Berengo Gardin (1930-) of the Olivetti headquarters designed by Professor Egon Eiermann (1904-1970) in Frankfurt in Germany. 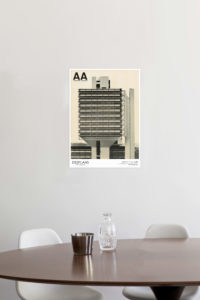