OMMX’s entry for the AIA Detroit Riverfront competition came third in an international competition with over 400 entries from 46 countries. The jury, headlining Daniel Libeskind, praised the proposal for its control, restraint and sophisticated design.

Throughout human history, setting down a marker has been a statement of ownership. Totems and flagpoles have a powerful role the American experience. This proposal begins with these markers, a collection of stelae set into the ground. Each of these are unique, cast in iron from clay moulds crafted by the individuals, communities and businesses of Detroit. This process subverts the homogeneity of the production line, and celebrates the creativity and individuality of the citizens of Detroit. As a family of similar yet singular monuments, they provide a sense of ownership over the plaza which is both collective and individual. 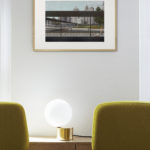