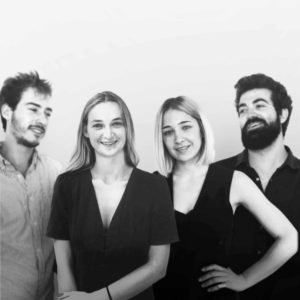 Atelier Bombing Sempione was born in Milan in 2016, from the convergence of views of Antonin Mangin, Gaia Meacci, Filippo Oppimitti and Beatrice Rogantini.
The origins of this group is the speculative project “Bombing Parco Sempione. Manifesto for a Critical Romanticism” developed within the Urbanism and Urban Design course held at Politecnico di Milano by professors Stefano Boeri and Michele Brunello.

The work of Atelier Bombing Sempione has been exhibited in the Sino European Center in Milan, in the Parco Arte Vivente in Turin, at the Third Istanbul Biennal in 2016 and in the XXII Triennale di Milano, Broken Nature: Design Takes on Human Survival.
Atelier Bombing Sempion keeps trying to affirm the impossibility of a grey area, a peaceful relationship between human and nature.